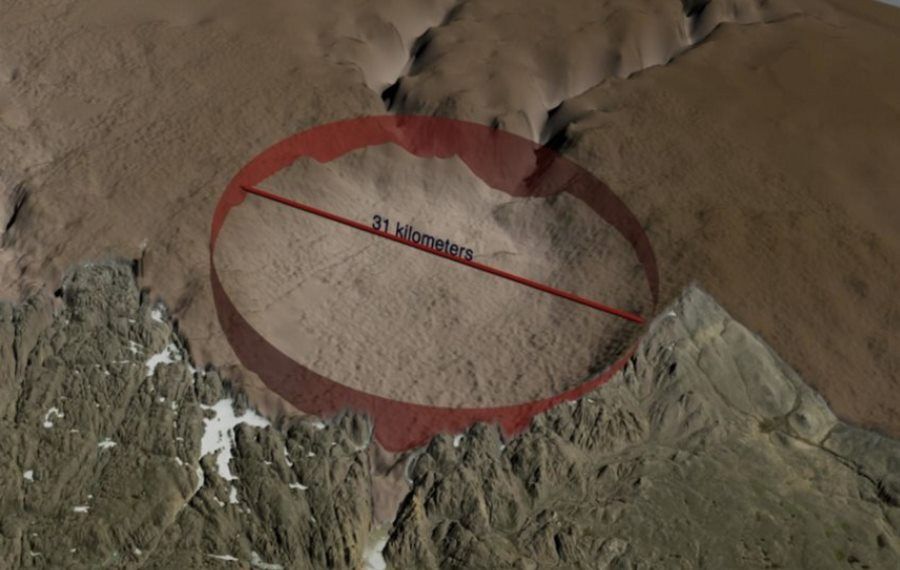 Under the Greenland ice sheet, researchers have found a huge impact crater more than 31 kilometers across and about 300 metres deep. Its size ranks it as the 25th largest impact crater on Earth.

Under the Hiawatha Glacier in p North-west Greenland, scientists have found evidence of a large meteorite impact. A nearly kilometer-thick layer of ice hides a huge crater. Scientists believe it was formed by a collision with a 1.5-kilometer-long iron rock.

The survey was conducted from the air using ice penetrating radar and took place in 2015. Scientists wanted to create a new topographic map of Greenland, and that’s when they noticed a huge, previously unknown circular depression beneath Hiawatha Glacier, located at the very edge of the ice sheet in p North Greenland. For three years scientists verified their discovery.

The scientist’s findings from the University of Copenhagen and the GeoGenetics Centre at the Natural History Museum in Denmark were published in the journal „Science Advances”.

– We immediately knew it was something special, but at the same time it became clear that it would be difficult to confirm the origin of this depression – said Professor Kurt H. Kjær from the GeoGenetics Center.

The crater is about 300 meters deep and over 31 kilometers in diameter, equivalent to an area larger than Paris. This is the first impact crater found under the ice sheet. Its size ranks it as the 25th largest crater in impacts on Earth.

– The crater is remarkably well preserved, which is surprising because glaciers are extremely effective erosion agents and should quickly remove impact marks. This means that the crater must be rather young from a geological point of view. So far we have not been able to directly determine the age of the crater, but its condition suggests that it formed after l d began to cover Greenland, so it is less than three million years old, but it is possible that it formed at the end of the last ice age (about 12 thousand years ago). years ago – footnote. red.) – explained Kjær. That’s quite a time range. If it was found to have formed at the end of the ice age, it would be one of the younger craters in this type of.

In Greenland, pieces of meteorites have been found in what appears to confirm the scientists’ findings . In the courtyard of the Geological Museum in Copenhagen stands a 20-ton iron meteorite found in p North Greenland, near the Hiawatha Glacier.

Researchers suspected from the start that the depression was an impact crater, but they found it difficult to determine. – Previous radar measurements of the Hiawatha Glacier were part of a long-term NASA effort to map the changing Greenland ice sheet. What we really needed to test our hypothesis was a focused radar survey. Our colleagues at the Alfred Wegener Institute and the University of Kansas have performed just such a study, thanks to a new generation of radar systems that ry exceeded all expectations and depicted the depression in stunning detail lach – admitted Joseph MacGregor, a NASA glaciologist and measurement expert in the radar, which ry participated in the study.

In 2016 and 2017, the composite The researchers returned to the site to map tectonic structures in the rock at the foot of The study revealed an enormous impact crater bki sediments in washed out of a depression through a channel drilled into the ice, into which he water was injected. – Pr The debris washed out of the crater had flat deformation features indicative of a violent impact, and this is irrefutable evidence d that the depression beneath Hiawatha Glacier is a meteorite crater – Professor Nicolaj K. Larsen from Aarhus University.

The impact of such a large meteorite certainly had a profound effect on the Earth’s climate, which in turn had serious consequences for life on the planet at that time. – The next step in our research will be to determine a more accurate impact date. This will be quite a challenge, as it will probably require the recovery of material from depressions that of the Earth’s surface melted during the impact. This is crucial if we are to understand how b impact on Greenland has affected life on Earth – noted Kjær.